Making Food and Beverage a Focal Point in the Hotel Industry

Ever since Fred Harvey opened his first “eating house-hotel” establishment along the Atchison, Topeka and Santa Fe Railway (AT&SF) tracks in Kansas in 1878, food and beverage has become an integral part of the hospitality business in the U.S. Harvey’s invention was a more formalized approach to what was served to guests of the grand hotels and smaller inns that dotted the landscape from Europe to Asia throughout eras before.

And while approaches to F&B have changed over time, F&B within the hotel space had historically been a loss leader, an afterthought, with the bulk of revenue derived from rooms. Success was if a hotel’s F&B department managed to break even.

As traveler mentalities became less transactional and more experiential, filling stomachs and pouring tipples suddenly became as important as putting heads in beds. But no longer would a vending machine Snickers bar cut it. Hoteliers were forced to step up their game and create F&B environments that spoke to these changing tastes—at breakfast and dinner, for room service and to-go.

This ushered in the era of celebrity-chef driven restaurants and establishments that concentrated on on-trend cuisine (think the farm-to-table movement), wowing not only guests, but even locals who weren’t  staying on-property. More covers meant more F&B revenue.

In speaking to one global head of a major hotel brand, which offers a free buffet and cooked-to-order breakfast, trends in F&B abound, but one of the clearer ones, he told me, is a move away from formality—something that is coursing through all segments of the industry. It falls somewhere between fast-casual and full-service.

It’s also a way toward improving food margins. His brand drives a premium rate, but he says there are ways to cut down on expenses around breakfast; not so much around the quality of food, but what it’s served on. He sees a move away from china to biodegradable packaging and utensils—like you’d see at a fast-casual restaurant like Sweetgreen—which are trashed or recycled after use, cutting down on dishwashing and table busing.

He said his brand may move in that direction for weekends, especially when there is more leisure occupancy from families, which don’t have the same needs as midweek business travelers.

Moves like these not only impact purchasing, but also labor, in what he called a limited scale of service, like that of many fast-casual restaurants. 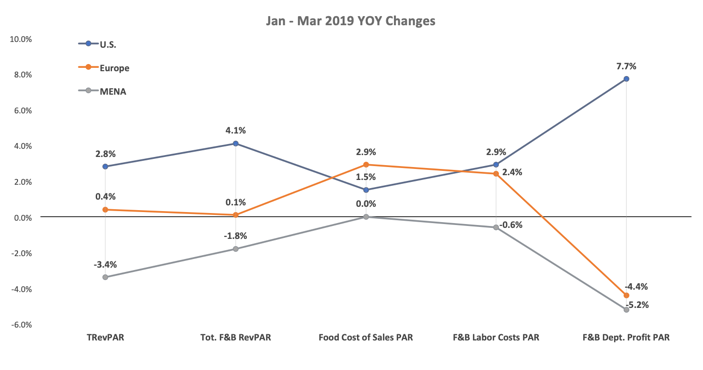 In the long run, the aim of all F&B operators is to find ways to lower operating costs, particularly food costs. A profitable restaurant typically generates a 28 to 35 percent food cost, which is the ratio of cost of food sales to food sales. When you couple food costs with labor costs, they can equal up to 75 percent of total sales. Keeping food costs at around 30 percent is optimal. This means continual scrutiny of not only your own bottom line, but those of your competitor establishments, to gauge whether you are winning or losing. If the latter: What can you do to improve your margins and where should the focus be? If the former: See where you are outperforming the competition and find ways to improve where you are only breaking even or operating at a small loss. Remember: “Continual improvement” to refine products, services or processes only works when you can measure your effectiveness and efficiency.

Making food and beverage the focal point of a hotel can be an additional revenue driver if managed well. The key is to not only understand your costs but be constantly vigilant of them to drive margins.

Food should be a thought; not an afterthought.