Tracking the Recovery: How COVID-19 is Reshaping the Hotel Revenue Mix

Hotels sell rooms. Yes, there are typically other things that hotels offer within their walls—food, drinks, events, ibuprofen in the sundries store—but when a customer opens up their laptop or calls the property directly, chances are they are thinking to themselves: I am booking a hotel room.

It makes sense then that the sale of guestrooms is the single biggest piece of revenue for a hotel. And for that reason, revenue per available room (RevPAR), a performance metric that assesses a hotel’s ability to fill available rooms at an average rate, has been the most promulgated metric in the industry.

But as the global pandemic drags on, shrinking hotel demand and dramatically upending cash flow, the revenue mix, or the composition of cash generation, has been slightly rearranged, according to data from HotStats, which charts profit and loss on a monthly basis.

It turns out, that as the pandemic has carried through 2020, miscellaneous income, or revenue derived outside a hotel’s core operations, has globally seen an increase as a percentage of total revenue, as the ensuing charts will show.

Which brings the discussion back to RevPAR. Here at HotStats, we have long championed metrics outside RevPAR—especially for hotels with various and multiple selling opportunities outside of the Rooms department. In these instances, total revenue per available room (TRevPAR) is a much more revenue-revealing metric. It accounts for rooms, but also food and beverage, conference and banqueting, golf and spa and other miscellaneous income.

Let’s put it in perspective. A hotel is like a jigsaw puzzle: each piece represents a different department, revenue stream or expense item. Overall property performance is an output of the sum of its parts; its totality—the full interconnected puzzle and not just one piece.

Key performance indicators are pieces, too. When combined, the full picture emerges.

RevPAR is one piece. TRevPAR is the full puzzle.

If the hotel industry was an intact Jenga puzzle, COVID-19 are the clumsy fingers that pull the piece that sends it crashing down. Upright, revenue and profit were stable. The pandemic toppled it. Demand dried up; occupancy dropped; revenue plummeted; profit turned negative.

But as famed author J.K. Rowling once remarked, “Rock bottom became the solid foundation on which I rebuilt my life.” The hotel industry is hoping for some wizardry of its own.

Here’s the full list, per the 11th edition of the Uniform System of Accounts for the Lodging Industry:

Here are the line items that made up the bulk of miscellaneous income prior to COVID-19:

As illustrated in the following charts, which show monthly revenue contributions and snapshots of June 2020 versus June 2019, rooms revenue, naturally, remains the highest percentage of revenue at hotels globally. But the charts also show that though F&B and C&B lagged over a span of post-COVID-19 months, miscellaneous income showed pronounced gains as a percentage of total revenue.

The increases in miscellaneous income are primarily—and not surprisingly—in attrition fees, cancellation fees, business interruption insurance (which isn't always easy to claim) and miscellaneous other income.

The trends globally are similar, with the U.S. and Europe more aligned in their revenue mix and the Middle East and Asia-Pacific in theirs. 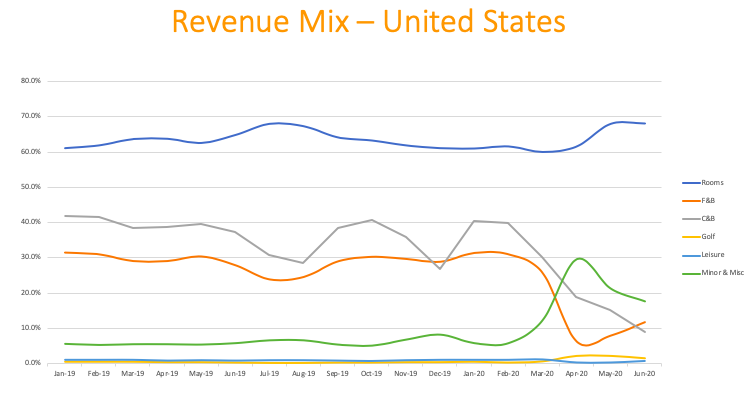 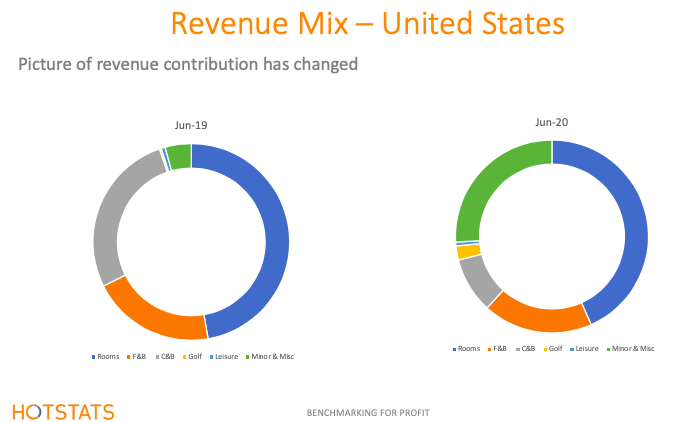 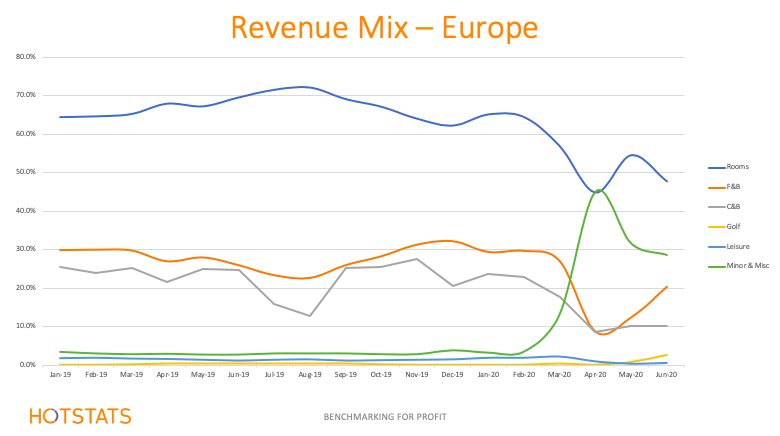 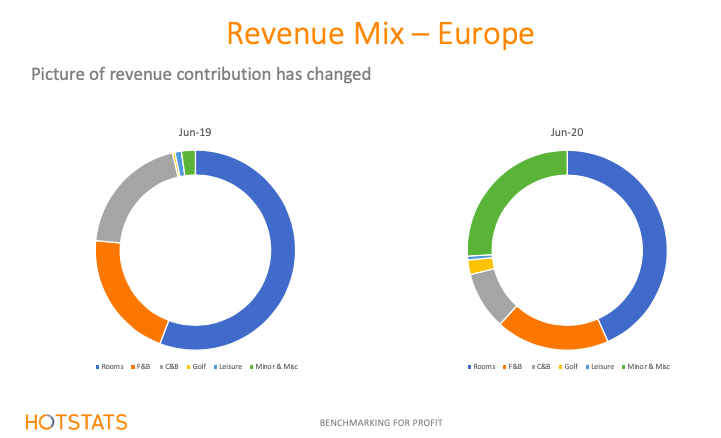 Meanwhile, a bounce back in F&B revenue may be attributed to the creativity of hoteliers capitalizing on attention and focus on clean spaces and following social distancing protocol in the most effective manner. 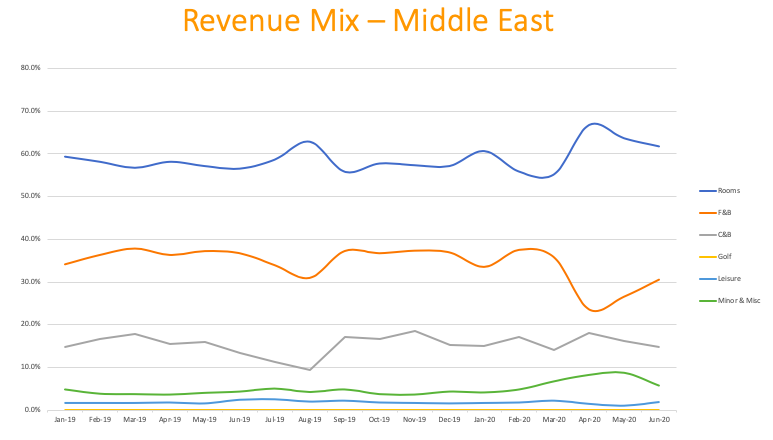 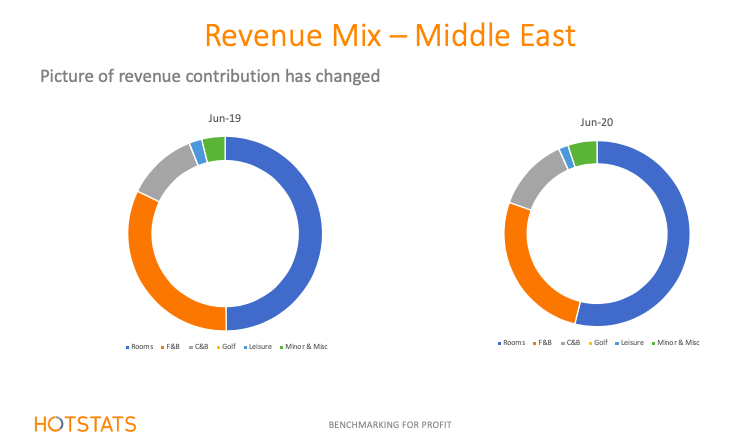 Spa/leisure, on the other hand, remains a loss center for now. 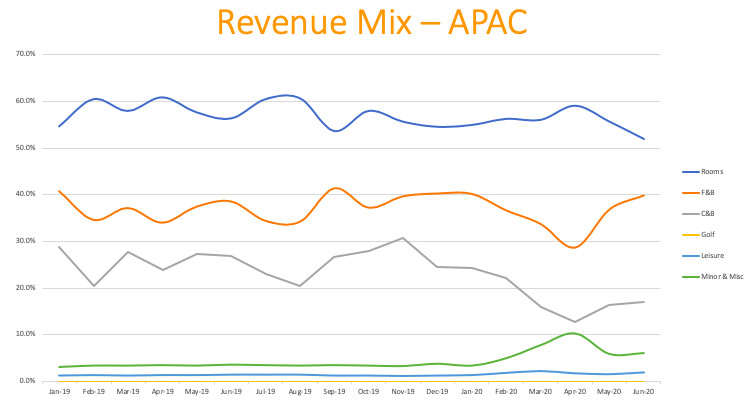 The hotel industry has a way to go before the ship is fully righted. It could take years to build back to pre-crisis revenue and profit levels. Hoteliers are a resilient bunch; they understand it’s an upward climb to build back business. But scaling the mountain can be made easier through a  clear focus and grasp of your own numbers and those of your competitors.

What Hotels Will Look Like in a Post-COVID World