It’s all Greek to me. The COVID-19 pandemic has so thoroughly dominated everyday life that we have all got an education in the Greek alphabet. From Alpha and Beta to Gamma and Delta, each new strain is a grim reminder of the coronavirus’ intractability.

Now, Omicron—the newest variant that has already spooked markets and caused travel bans from some southern Africa countries. Though nascent, there is the reality and worry that the new strain could derail the hotel industry’s fledgling recovery, in particular if plans move forward to tighten testing policies, like in the U.S.

Indications are that future hotel bookings, meetings and other hotel-related activity will be impacted by the presumed expectation of future travel impediments, whether self-imposed, company-imposed or government-mandated.

October data, which had only Delta to deal with, saw a striking resurgence in the Middle East, bolstered by Expo 2020 in Dubai, a 182-day World Expo that began at the beginning of October and runs through March.

Not surprisingly, total revenue followed suit with TRevPAR hitting $281, 13% higher than in October 2019. The kicker: The increase in revenues was complemented by a still-deflated cost base. Total payroll in Dubai was $45 on a per-available-room basis, which was $14 lower than at the same time in 2019. The combination of revenue and expense led to gross operating profit per available room (GOPPAR) of $150, a full $50 over October 2019.

Other global regions were not able to replicate the success of Dubai and the broader Middle East. In the U.S., major indices were still down double digits in October 2021 v. October 2019.

Since a rapid uptick in occupancy from the beginning of the year through the summer, hitting an apex in July, occupancy in the U.S. has since more or less flatlined, a signal that the leisure boom could not be sustained at the same levels prior.

Though much maligned, there is propitious data surfacing in corporate travel. In October, corporate ADR was $7 higher than in October 2019 and $35 higher than in the previous month. Corporate volume mix, defined as the proportion of rooms sold at the corporate rate compared to total rooms sold, has grown 6 percentage points since July. 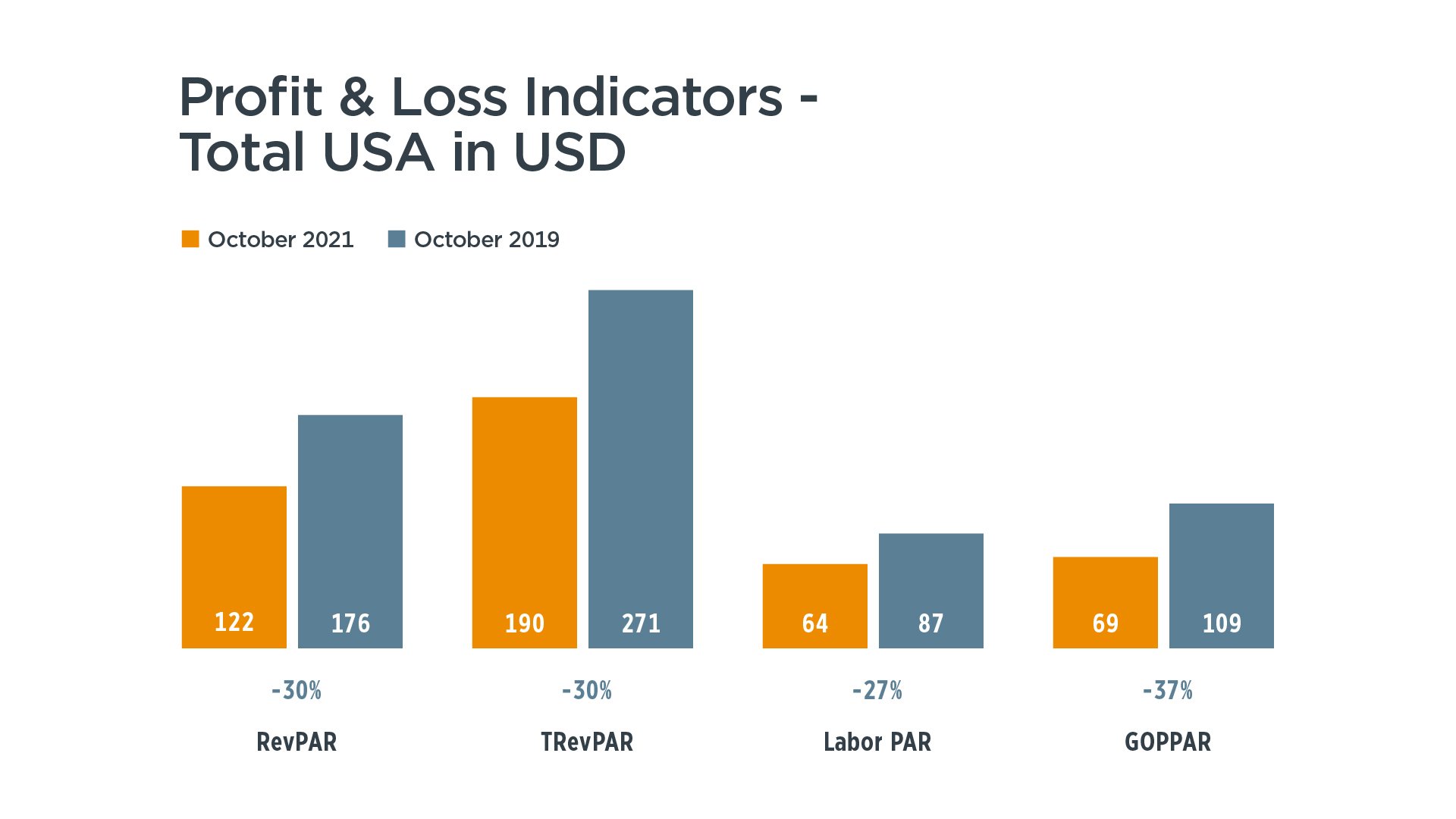 Europe’s recovery is following a similar trajectory to that of the U.S. in terms of the numbers. RevPAR, TRevPAR and GOPPAR were off some 30% in October versus the same month in 2019—auguring a daunting fall and winter season. This is being made abundantly more difficult as the continent deals with a recent surge in COVID that is now being exacerbated by Omicron and prompting many countries to turn back to restrictions.

After Austria reinstituted a lockdown on November 22, it has extended it until December 11, becoming the first EU country to take such a measure in the face of the COVID-19 surge.

Among other costs, one to pay special attention to are utility expenses, which, at €5.28 per available room, are now at the same level as 2019. Annual inflation across euro-using countries hit 4.9% in November, driven mainly by soaring energy prices, according to Eurostat, the EU statistics office.

As Asia-Pacific continues to piece together its comeback, it, too, is tightening borders in response to the Omicron specter. Japan this week announced the country would bar foreign arrivals, only weeks after easing restrictions for visa holders, including short-term business travelers and international students. And the Philippines has barred arrivals from seven European countries, including the Netherlands, Belgium and Italy.

“The problem for the travel industry is that the fear factor, whether science proves it to be justified or not, has returned almost overnight,” Gary Bowerman, director of travel and tourism research firm Check-in Asia, told Al Jazeera.

Omicron Emergence a Yardstick for the Hotel Industry