COVID-19 has made breaking-even more tolerable than the alternative—going broke. It's not the hand hoteliers wanted, but it's the hand they've been dealt, forcing them to approximate at what occupancy rate they can operate their hotel such that cost and revenue are equal.

In these extraordinary times, it's been all pain, no gain.

But as the global economy resets, hoteliers are digging themselves out from the coronavirus carnage. And a break-even analysis is one way to jumpstart the excavation project.

One hotelier who knows this is Imesh Vaidya, CEO of Premier Hospitality, which is based in Albuquerque, NM, and has a portfolio of nine hotels in the select-service space. The company opened a SpringHill Suites in Durango, CO, at the end of April because, as Vaidya put it, "it was the difference of losing $6,000 per day or $5,800 per day."

A break-even analysis, he said, "motivates us and is a deciding factor for purchasing a property. It helps determine how we staff, our purchasing decisions—it's used for all aspects of the property."

Subsequent past system shocks, including 9/11 and the Great Recession, prompted many hotels to drop rates in an attempt to jumpstart demand. Not so this time around, according to Vaidya. He's not interested in making rate part of his break-even calculus. "We are not worrying about achieving a break even with low ADR," he said. Beyond revenue, once countries, states and cities begin reopening, expectations are that costs could climb based on the sharpened vigilance paid to areas such as disinfecting and cleaning. "Payroll," Vaidya said, "will increase for extra time spent on rooms and public spaces and paying someone to wipe elevators and the pool down."

At the newly opened Durango SpringHill, lobby areas are wiped down on the hour. At the same time, cleaning rooms takes longer due to extra and intensified cleaning, which is adding as much as 10 minutes per room. "That's an extra 10 minutes per room not budgeted for," Vaidya said, adding that the cost of items, including sanitizing stations, masks, thermometers and disinfectant wipes, will go up. "Cleaning supplies are adding $1,200 in cost per month," Vaidya said.

The Break-Even Point
Hotels don't have the luxury of staying closed forever. Just because a property is shuttered doesn't mean that it no longer incurs costs—there is still debt service to cover, property taxes to be paid and other expenses, such as utilities and paying a skeleton crew to maintain the property.

The idea behind a break-even analysis is to understand at what point a property can operate at neither a loss or gain.

The subsequent graphs seek to show that; they analyze the break-even points by asset class across the U.S., Europe, Asia-Pacific and the Middle East.

The trends are similar regionally: the further down the chain scale, the higher the occupancy rate needed to break even.

The explanation for that tendency rests in the variance between asset classes. The break-even occupancy for the total U.S. to achieve a zero gain or loss in profit is 37.3%. The model is further refined by calculating the break-even point for each asset class separately, as a way of minimizing the average room rate variance of the total sample.

The data for luxury points to a break-even occupancy of 34.4%, around 5 percentage points lower than other classes. Luxury hotels tend to be more complex operations, frequently comprised of multiple F&B outlets, larger space for meetings and conferences, spa facilities and in some locations a golf operation. The variety of potential revenue centers, outside of the room alone, allows a luxury hotel to achieve a level of profitability that doesn't depend as much on room occupancy as other asset classes, which are much more reliant on room sales to generate profit. 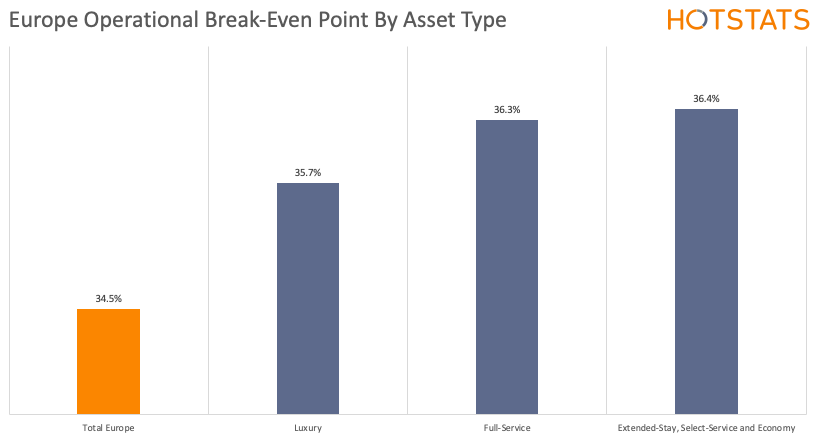 Moreover, although profit margins have a tendency to be lower for more complex operations, in dollar terms, their GOPPAR is higher and, therefore, don't need as much occupancy to cover their costs.

Conversely, select-service hotels, extended-stay hotels and economy hotels need higher occupancy rates to achieve a break-even position. This is because these types of assets are typically dependent on one revenue center to achieve profitability: rooms. These assets normally have smaller F&B offerings or, in the case of economy hotels, none at all. The sale of rooms becomes the primary source of income for these hotels, which means that they need to achieve a higher occupancy rate in order to assure that flow-through results in profit gains, or, in this case, to break-even. 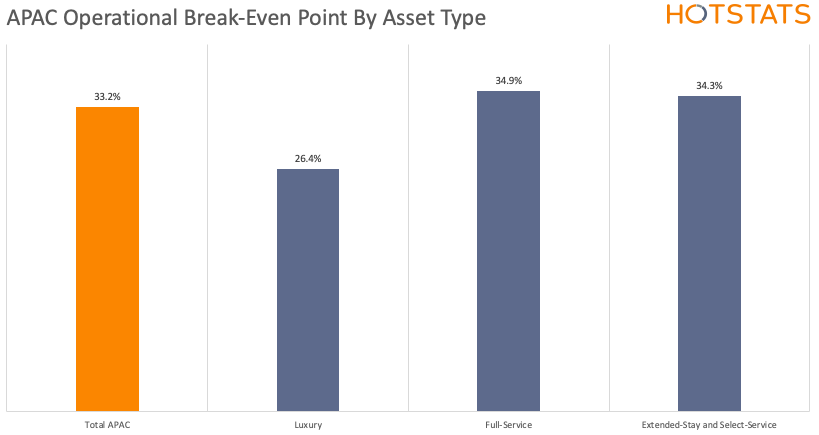 The results for the other regions measured follow a similar trajectory as the U.S. In Asia-Pacific, the break-even for luxury is 26.3%, which is around 8 percentage points lower than full-service and extended-stay and select-service. The gap is narrower in Europe.

Meanwhile, the Middle East, at 30.3%, was the only region where luxury break-even occupancy is higher than full-service (29.5%). One explanation for the anomaly: the Middle East has seen a large increase in supply that has been concentrated in the luxury market. Dubai is a good example of this. For this reason, increased competition in the segment led to rate cuts and capped its ability to increase contribution margins (the revenue generated by each room minus the variable costs associated). Therefore, saturation of the market in the luxury segment makes it necessary for hoteliers to increase the number of rooms sold to be able to cover their fixed costs and break-even.

Put Another Way
Using examples from the retail world helps to explain how different asset classes react. Luxury items, such as high-end watches (think Rolex) or cars (think Porsche), cost more to buy than more consumer-friendly items (think Casio and Hyundai, to use the watch and car examples).

Luxury companies achieve profit on price point and not volume; vice-versa, companies not peddling luxury goods rely on volume over price. Selling 10 watches at $7,000 achieves the same result as selling 700 watches at $100. It's $70,000 profit, but achieved by different means.

The result is different occupancy rates that it takes to break-even. 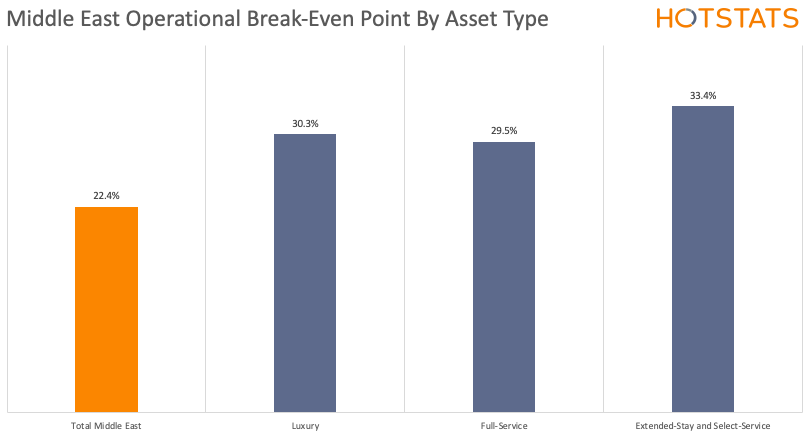 Unlike Anything Before
Results are only as good as the data used to crank them out. There is little argument that COVID-19 will not only end up causing more harm to the hotel industry than any other prior event, but also, conceivably, permanently alter hotel form and function—from construction and design to operations. A complete paradigm shift. As Gary Isenberg, President of Asset & Property Management Services at LW Hospitality Advisors, put it, "Historicals don't mean anything any more." That means the only way to measure operational effectiveness is by reference to the market.

Consider the complimentary breakfast that many select-service brands served guests, traditionally through a buffet-style convention. That just might go the way of the dodo; which is to say replaced by an alternative, such as a grab-and-go styled offering. And while it could be seen as a minus for the guest experience, it could end up being a plus for hotel owners. "Comp breakfast is a a huge expense load that impacted the bottom line," Isenberg said. "Now, that's maybe $5 out of my per-occupied-room cost basis."

The pivot now is to recovery time and what that tail will look like. That's how Bob Rauch, CEO of RAR Hospitality, a San Diego-based management company, views it, in what he refers to as "the new normal" that includes safety and sanitation protocols that are hospital grade and "never been seen before in our industry," he said.

Rauch sees the select-service space as setting the bar for the return of travel demand, believing they "will be able to drive a significantly higher rate than economy, hence reducing the occupancy break-even bar," he said. Luxury, he predicts, will flounder for some time, struggling with selling rooms coupled with continued high payroll costs. Meanwhile, Rauch believes the extended-stay model is a winner in the new normal due to reduced housekeeping costs and turnover. However, the prevailing notion among the industry as a whole is that most segments will embrace and operationalize an extended-stay model when it comes to cleaning that calls for non-daily housekeeping (save for amenities replenishment), which could mitigate labor costs.

After years and quarters of positive profit gain for hotels, COVID-19 has forced hoteliers to think differently and consider break-even modeling. Running a hotel that loses money is not a viable business model and with occupancy globally taking a hit, it is incumbent on hoteliers to consider what occupancy rate will allow a hotel to sustain operations. The sooner the better and with the hope that the break-even occupancy rate is only a short-term necessity.

3 Reasons to Turn to Benchmarking in the COVID-19 Era