How COVID-19 Is Eating into Hotel Profit

COVID-19 plunged a knife in the collective heart of the global hotel industry and in one fell swoop destroyed demand, sending revenue and profit to historically low levels.

This global pandemic is the most harrowing event to ever besiege the hospitality industry. As stridently as room sales have plummeted, the crash in food and beverage (F&B) is even louder. We reviewed March data to see how deeply the F&B department has cratered and what this means for Conference and Banqueting (C&B) and other areas of the profit-and-loss statement (P&L).

The volume of business for U.S. hotels decreased dramatically in March: a 48.8-percentage-point contraction in occupancy compared to the same month a year ago and fueled by the cancellation of blockbuster March events such as Seattle’s Emerald City Comic Con, Austin’s South by Southwest (SXSW) and Miami’s Ultra Music Festival, among others.

The conference segment, wherein crowds of people mingle in close proximity, unsurprisingly accounted for almost half this occupancy decline, with a 20.4-percentage-point year-over-year (YOY) fall. It was followed by leisure, down 14.2 percentage points YOY. 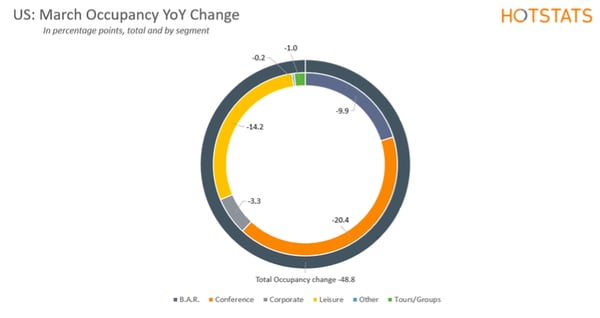 All revenue centers have had to come to grips with the dire consequences that accompany a business-volume slump of this magnitude. In particular, F&B revenue per available room plummeted by 66.5% — an even deeper decline than the 64.4% recorded in RevPAR.

Typically, hotels capitalize on meetings, such as company-sponsored parties, that spin off big conferences and events to boost F&B revenue. And so, Conference & Banqueting revenue was the hardest hit in March, down 69.0% YOY to $13.24 on a per-available-room basis.

A cornerstone of the official coronavirus containment strategy in many states was the mandatory closure of dine-in service in restaurants and bars, allowing only for delivery and takeout.

So much so that even President Trump urged all Americans to forgo restaurant dining on March 16 as a way of flattening the curve. For hotels, this translated into a devastating 64.3% and 63.6% YOY respective fall in restaurant and bar revenue on a per-available-room basis. 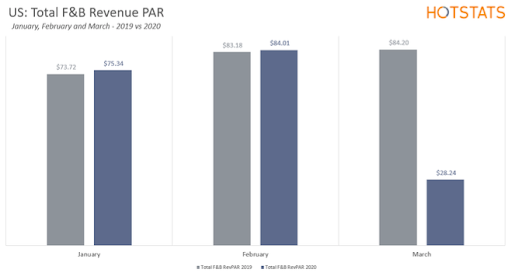 Room service revenue, albeit severely slashed, fared best in the midst of disintegrating demand and recorded a 60.0% YOY decline. Room service has been on the way out the door for some time as grab-and-go and casual dining trends have helped turn door delivery into an anachronism.

But is room service ripe for a comeback? As more people look to social distancing and adapt hermetic behavior when on the road, room service may become the preferred dining option for guests and recover faster than traditionally more dynamic F&B revenue streams.

On the expense side, cost of sales rapidly adjusted to the dwindling revenue. This alleviated the pressure over gross profit as a percentage of F&B revenue, which decreased by 3.7 percentage points YOY to 80.5%. Labor costs, as expected, proved stickier relative to cost of sales and expenses. However, F&B payroll managed to adjust more than its rooms counterpart, recording declines of 38.6% and 30.4% YOY, respectively. 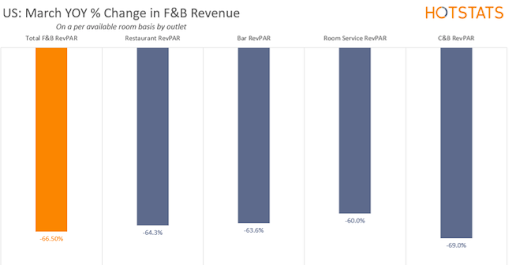 The severe challenges to the top line led to the F&B department recording a departmental profit of -$3.19 per available room, 111.3% below the same month of the previous year. However, the ability of hoteliers to adapt their F&B cost structure rapidly meant that they were able to achieve a 43.9% departmental flex, well above the 14.2% recorded in the Rooms department.

The flex percentage shows how much of each dollar in lost revenue the operation was able to save for its bottom line. Therefore, a higher flex percentage means a smaller profit loss. To add perspective, if the F&B department recorded the same flex as the Rooms department, the result would have been around -$48 departmental profit per available room for the month, or an extra $44.82 per-room loss.