The scores of hotel closures and staggering number of job losses are evidence of the pandemic’s pernicious impact on the industry. An overwhelming number of hotels have suspended operations because of lack of demand, while hotels that remain open are running bare-bone operations.

Meanwhile, labor, which two months ago was the hotel industry’s biggest concern — finding it and paying for it — is no longer such a worry because there is hardly any of it left. In the U.S., leisure and hospitality jobs were by far the hardest hit. According to the U.S. Bureau of Labor Statistics, employment in leisure and hospitality plummeted by 7.7 million, or 47%, in April.

Because of COVID-19, hotels across the country are on track to lose more than $500 million in room revenue per day.

In the UK, a total of at least 1 million jobs are at risk, according to the UK Hospitality Association.

The current situation across the globe is bleak, but like most predicaments, the darkest hour is just before the dawn. A recovery, even if it’s not on the immediate horizon, is out there, and will eventually come. But how long will it take?

As a data company, HotStats is positioned to draw on historical data to predict future trends. In an attempt to find some commonality between COVID-19 and past shocks to the system, we looked back at the impact 9/11 and the 2008 global financial crisis (GFC) had on the UK hotel industry, because HotStats data on the region stretches back to the 1990s.

One thing is clear from the jump: Revenue recovery is much quicker than profit recovery. In a shorter window of time, UK hoteliers are able to generate revenue faster than they are able to retain it.

According to HotStats, on a 12-month-moving average, post-9/11 revenue recovery (TRevPAR) was achieved in 3.5 years’ time compared to more than 6.5 years for profit (GOPPAR). 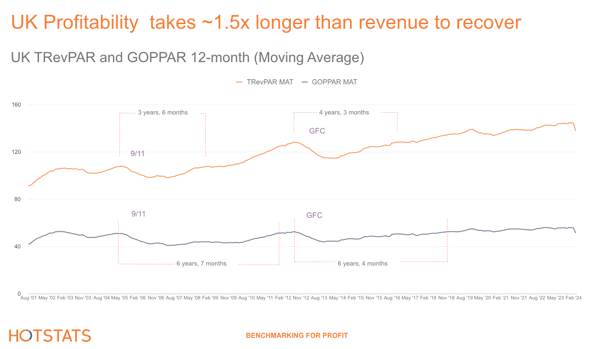 9/11 was the first major shock to the global economic system since the recession of the early 1990s, when a reported 66% of U.S. hotels went bankrupt and hotel room occupancy fell below the break-even point, which is similar to today’s hotel operating environment.

The approximately twice as long recovery for profitability versus revenue post-9/11 is a byproduct of myriad variables, but one that stands out is the hotel industry’s costly reliance on online travel agencies (OTAs) as a distribution channel, which reduced hotel room sales because of the high commissions OTAs charged.

The result was reduced flow-through, because instead of receiving 100% of the room sale, hotels might receive only 75%, for example.

With OTAs, the hotel industry opened up Pandora’s box and close to 20 years later continues to grapple with the high costs associated with the Expedias and Booking.coms of the world.

Though 9/11 was a disruption caused by terrorism and was not symptomatic of any underlying economic wobble, the 2008 global financial crisis — or Great Recession — which lasted from late 2007 through summer 2009, was a direct result of economic malfeasance.

Its fallout impacted all corners of industry, including travel and hospitality, which suffered a black eye out of the gate amid the so-called “AIG Effect,” a public relations nightmare for the company, which only days after receiving a bailout package spent more than $440,000 on a corporate meeting at the St. Regis Monarch Beach Resort, in Dana Point, Calif.

When word of the meeting got out, the company was viciously censured, and President Barack Obama later further condemned meetings and travel to places such as Las Vegas.

The revenue recovery subsequent to the GFC took four years and three months, just shy of one year longer than the 9/11 recovery on a 12-month-moving average. On a profit line, at six years and four months, GFC recovery took about the same time as 9/11.

Although 9/11 and the GFC were some six years apart, the impact on hotel profitability in the UK was fundamentally uninterrupted — a span of 13 years to get back to pre-9/11 GOPPAR, because the almost exact point of the 9/11 recovery gave way to the GFC. Meanwhile, amid that same 13-year span, revenue rose 19% on a 12-month-moving average.

This phenomenon is further illustrated when using 2000 as a baseline year for comparison and looking at percent change against the baseline. By the fourth year, both RevPAR and TRevPAR had recovered to their 2000 levels, but GOPPAR recovery dragged on much longer. 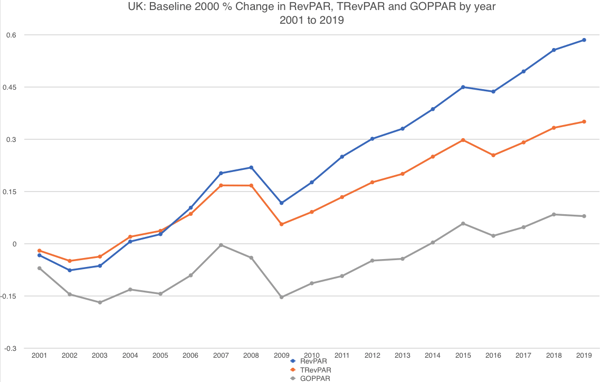 By 2007, it almost caught up, but then the GFC hit and plunged a knife through GOPPAR again. As a result, GOPPAR levels were below those of 2000 until approximately 2014, so the subsequent crises made for an almost 14-year profit recovery period. Meanwhile, top-line metrics after 2004 remained consistently above their 2000 levels, despite a deceleration in 2008 followed by a dip in 2009.

Will It or Won’t It

When Danish physicist and Nobel Prize winner Niels Bohr said, “Prediction is very difficult, especially if it’s about the future,” he was onto something. What we know is in the past; the unknown is tomorrow. The fallouts from 9/11 and the GFC were likely the two biggest shock events of global impact this century — until COVID-19.

The travel industry showed resilience in the aftermath to 9/11 and the GFC, but so, too, revealed its fragility: Any thunderbolt can throw it off-kilter. It took a few years for the hotel industry to recover revenue; it took several years to recover profitability.

Though prediction can be dangerous, even an optimist would take a COVID-19 rebound that mirrored the past two shocks. Pessimists see it worse, and they could have a point: Not since Conrad Hilton bought his first hotel in 1919 has an event triggered such shock and impairment, from hotel closures to massive layoffs. Early data already bears this out.

How the hotel industry will bounce back this time is still undetermined. As someone once said, “Forecasting is the art of saying what will happen, and then explaining why it didn't.”