Asia-Pacific, where the coronavirus first appeared, continues to serve as the baseline for global hotel data performance comparison. March data indicates that the virus’ impact on hotel performance is not subsiding; in fact, it’s intensifying.

After breaking even in February, gross operating profit per available room (GOPPAR) turned negative on a dollar basis in March and was down 117.8% year-over-year. The fall in GOPPAR set a record for the region, besting the previous record decrease of 98.9%, achieved only a month earlier.

For the quarter, GOPPAR decreased 80.5% over the same time period last year.

The steep loss in rooms revenue, combined with a more than 70% YOY drop in F&B RevPAR, led to a record-setting 75.3% YOY decrease in total revenue (TRevPAR). In February, TRevPAR dropped 52.5%, which was the greatest YOY decrease at the time recorded by HotStats.

As many hotels in the region either closed or scaled down operations, expenses fell in tandem. Total hotel labor costs on a per-available-room basis decreased 38.5% YOY, while total overhead costs receded 40% YOY. Expenses were down across undistributed departments, including Property & Maintenance (down 34%) and inclusive of utilities cost, which declined 40.8% YOY.

Profit margin in the month turned negative at -27.4%, a decrease of 65.1 percentage points over the same period a year ago. 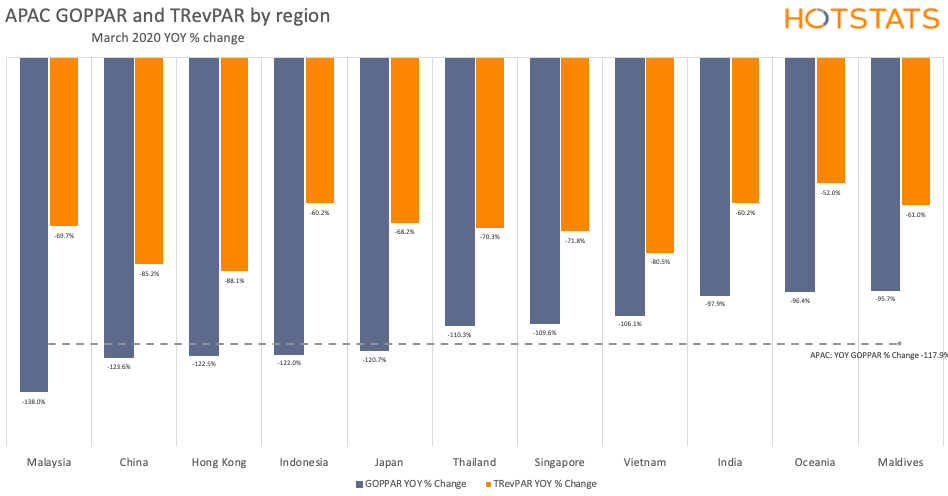 One of Asia-Pacific’s success stories in battling the virus is South Korea, which was well ahead of other countries in testing its citizens, reportedly developing the capability to test an average of 12,000 people a day. Only a reported eight new cases of the virus were confirmed in South Korea between April 22 and 23, just under two months after what then appeared to have been the peak of the outbreak on February 29, when the country reported the world's most infections outside China.

The propitious news, however, did little to impact Seoul’s hotel performance in March, which saw a stunning 178.7% YOY drop in GOPPAR, the highest decrease in the region, even as its TRevPAR decline (70% YOY) was middling.

RevPAR was down 85.3% YOY, and while occupancy dropped off the cliff (down 60.5 percentage points to 9.5%), average rate actually was up 8.8% for the month compared to the same time last year, a favorable sign for when COVID-19 appears farther in the rearview mirror.

Expenses across all departments were down more than double-digits on a per-available-room basis, but it still wasn’t enough to prevent a precipitous drop in profit margin, which was down 79.2 percentage points, falling into negative territory, at -57.3%. This was much greater than the -2.5% profit margin recorded in February.

Singapore, lauded for the manner it initially addressed the virus, now reportedly has the largest recorded outbreak in Southeast Asia. Between its first case on January 23 and March 23, Singapore reported fewer than 510 known cases of COVID-19. Now, it has more than 11,000 and the uptick is being attributed to its huge migrant worker community, which tends to live in small, confined spaces on the outskirts of the city.

It’s that very same migrant worker community responsible for building up Singapore into the gleaming metropolis it is today. Even so, like the rest of the world, the city’s hotel performance data in March was anything but sparkly.

GOPPAR moved into negative territory at $-11.41, down 109.6% YOY. The drop is a huge shift from February when GOPPAR was in positive territory, at $24.86. Naturally, it was the first time GOPPAR was recorded as a negative value since HotStats began recording data for the region.

TRevPAR was down 71.8% YOY, as RevPAR tumbled 75.6% on the back of a 57.9-percentage-point decrease in occupancy to 26.9%—a 15.5-percentage-point drop from last month, and a tell-tale sign that improvement from a demand perspective still has a way to go.

Scaled-down operations or hotel closures led to double-digit drops in expenses, including labor, which was down 36.9% YOY on a per-available-room basis. Total overhead costs were down 36.7% YOY.

Like most other Asia Pacific cities, profit margin turned negative in March, dropping to -13.7%, a 53.8-percentage-point decline over the same time last year.