With cases in China starting to plateau, the World Health Organization (WHO) declared Europe to be the new epicenter of the coronavirus outbreak in March, fueled by the rapid expansion of the virus across Italy and Spain. This prompted governments across the region to scale up the measures to contain the spread, and several lockdown and quarantine orders ensued.

The consequences on the European hotel industry were swift and devastating. Gross operating profit per available room (GOPPAR) in March 2020 plummeted by 115.9% compared to the previous year to -€8.33. This is the first triple-digit year-over-year decrease in profitability ever recorded in the HotStats database for Europe, as well as the first time GOPPAR turned negative in the region.

Driving this profitability slump was a massive contraction in demand. Occupancy in March plunged by 44.8 percentage points YOY to 27.4%, which in turn drove RevPAR down by 66.2%. A further 65.6% decline in total F&B revenue per available room contributed to the sharp 61.6% YOY fall in TRevPAR.

In response to this top-line nosedive, undistributed expenses on a per available room basis fell across the board, resulting in a 25.3% YOY decrease in overhead costs. Total labour costs also adjusted downwards by 28.8% YOY. However, these flex efforts were not enough to offset the lost revenue, and profit margin in Europe was recorded at -13.1% in March 2020, placing 45.7 percentage points below the same month of the previous year.

The March results are in stark contrast to the two previous months, as both January and February had recorded YOY GOPPAR growth, up 0.7% and 1.2%, respectively. However, the severity of the downturn in March made the first quarter of 2020 the worst performing Q1 in Europe recorded by HotStats since it started charting the region’s data. The YOY contraction in GOPPAR for Q1 2020 was 49.9%, amply surpassing the previous record set by Q1 2009, when profit per room fell by 22.2%, the result of the Global Financial Crisis. 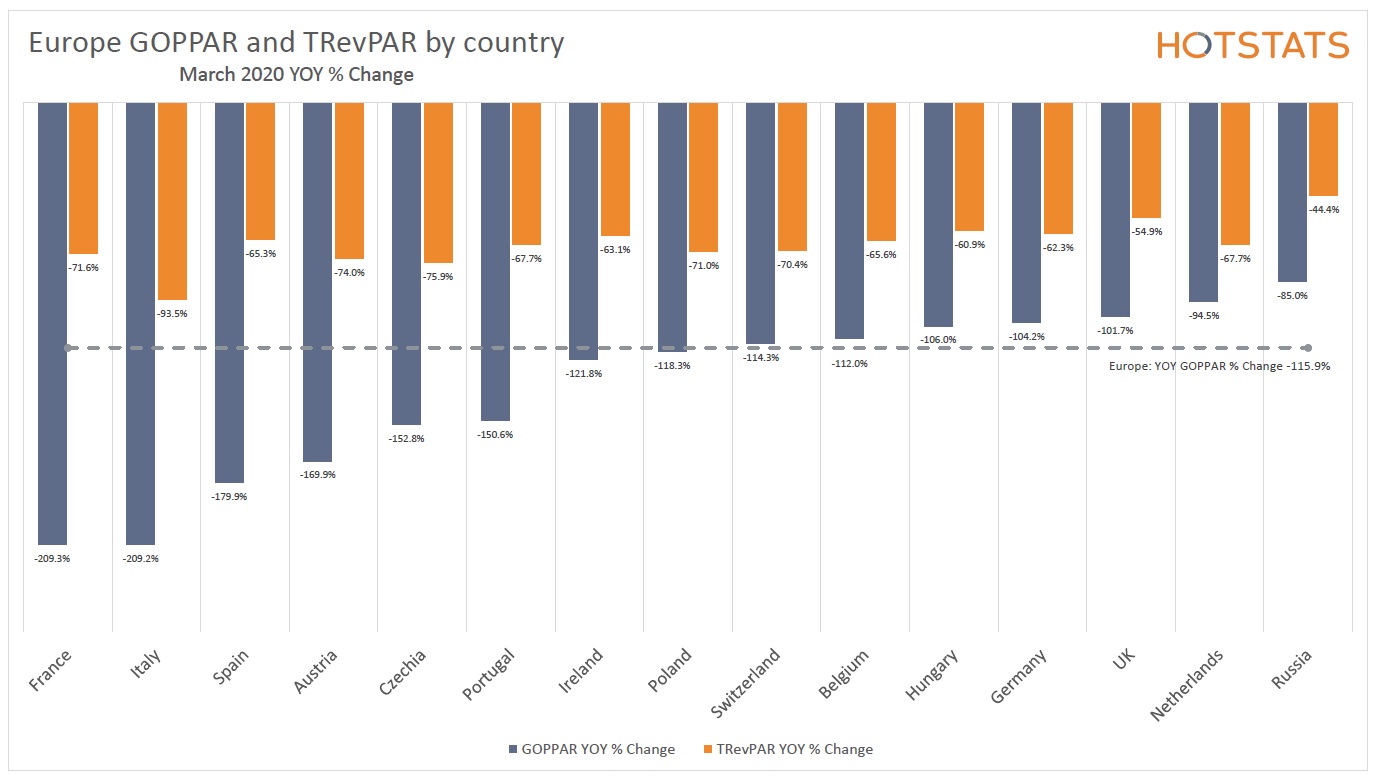 Italy was the hotspot of the coronavirus outbreak in Europe in March, as cases in the country increased from 400 at the end of February to more than 53,000 barely one month later. Lombardy, Italy’s most affected region, was the first to be placed under forced quarantine. As early as March 8th, the Italian government prohibited anyone from entering or leaving the northern region and its capital, Milan. Hoteliers in the city had already faced a profit per room contraction in the month of February, with a 27.1% YOY fall in GOPPAR. In March, the spread of the pandemic and the containment measures associated with it severely deepened this trend, resulting in a record 182.1% YOY GOPPAR drop to -€64.96.

Lost demand was at the heart of the top-line slump. Occupancy in the city marked an all-time low in March at 1.7%, a 69.5-percentage-point decline compared to the same month of the previous year. Average rate followed suit and was slashed by 21.5% YOY. As a consequence, RevPAR recorded a YOY contraction of 98.1%. F&B revenue was cut by 96.2% YOY on a per-available-room basis, and with the rest of the revenue centres sharing in this same downward trend, TRevPAR plunged by 96.2% compared to March 2019.

Expenses were slashed across all operated and undistributed departments to compensate for the precipitous revenue decline. Total overheads per available room were down by 49.4% YOY, and labour costs dropped by 53.8% YOY. However, this was not enough to prevent the erosion of profit margin in March, which placed 600.9 percentage points below the same month of 2019, at -574.1%.

Spain was another epicenter of the COVID-19 pandemic in Europe in the month of March, as the country increased its number of confirmed cases from 430 to more than 70,000 in the span of just a few weeks. Madrid was the hardest hit, spurring the regional government to decree the closure of all educational institutions and galleries on March 11th. Three days later, a nationwide quarantine order was enacted.

After consecutive upticks in the first two months of the year, profit per available room took a massive hit in March, and GOPPAR was reduced by 127.7% YOY to -€17.12. Plummeting occupancy, down 59.7 percentage points YOY, fueled the 78.9% YOY drop in RevPAR. Further declines in non-rooms revenue added to the top-line plunge, and TRevPAR placed 75.8% below the previous year.

Hoteliers in the Spanish capital managed to flex overheads (down 31.9% YOY) and labour costs (down 33.4% YOY), but the unprecedented top-line contraction still resulted in a loss of 79.3 percentage points of profit margin YOY to -42.3%.