U.S. hoteliers got their first taste of the impact of COVID-19 on hotel profit and loss in March, and the bad taste in their mouths is likely to linger for a while.

Gross operating profit per available room (GOPPAR) was down 110.6% YOY to $-12.71. The triple-digit drop was by far the largest percentage decline ever recorded by HotStats since it started charting U.S. data. The previous high was -10.4% in March 2015. March 2020 also marked the first time in the HotStats database that the U.S. recorded a negative GOPPAR value.

The decrease in GOPPAR was a result of gaping drops on the revenue side. RevPAR for the month was down 64.4%, heavily influenced by a 48.8-percentage-point drop in occupancy to 31.5%. The presumption is that April occupancy will suffer even more, as many hotels were still open in early March.

The decline in RevPAR, combined with a more than 65% drop in total F&B RevPAR, led to a 62.1% decrease in total revenue (TRevPAR), the greatest decrease since January 2016, when TRevPAR was down 8.2% YOY.

As the top line dried up, expenses in March receded, too, but still ate into the already attenuated revenue. All undistributed expenses came down, while total labor costs on a per-available-room basis were down 21% YOY. However, savings in payroll did not match drops in revenue, since many hotels still had to maintain certain levels of staffing, even amid shuttered hotels.

Profit margin for the month turned negative, down 52.8 percentage points to -11.6%. 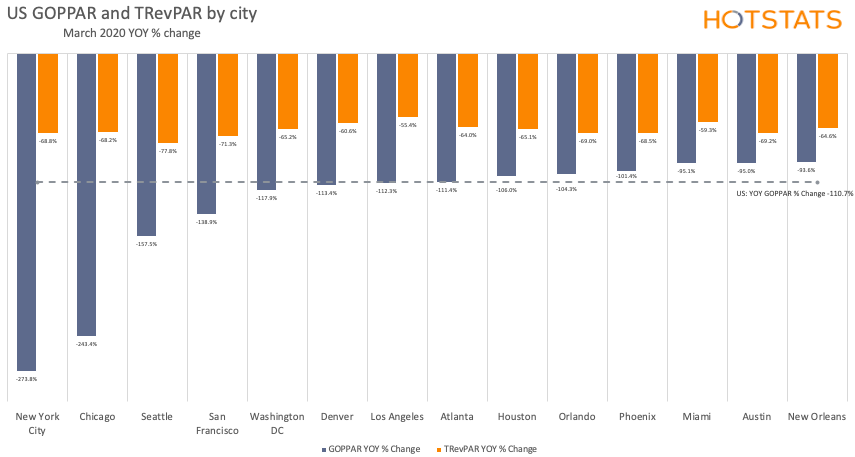 Expectedly, urban markets and big-box full-service hotels were hit harder than properties in secondary and tertiary markets that skew toward select-service.

This was the case in New York City, which has around 16% of all confirmed cases in the U.S.—by the far the most. Occupancy in March hovered around 25%, as many hotels shut their doors altogether, including the New York Hilton Midtown, the city’s largest hotel. The precipitous 55.7-percentage-point drop in occupancy grounded RevPAR down 71.5% versus the same time a year ago. The prolific rooms RevPAR decrease, coupled with F&B revenue sinking more than 70% YOY, led to TRevPAR sinking 68.8% YOY.

Expenses across the board were similarly down, including total labor, which decreased 14.5% YOY—a percentage that will likely fall farther in April, since many hotels in New York had not furloughed employees until mid-to-late March.

Any decrease in expenses had little impact on profit in the face of vast depressed revenue, which dropped GOPPAR 273.8% YOY to -$112.7.

Chicago hotel performance data fared similar to New York. Cook County, which comprises Chicago and is the second-largest county by population in the U.S. after Los Angeles County, has 31,953 confirmed COVID-19 cases as of April 28. As expected, its hospitality industry was punished in March. RevPAR was down more than 72% YOY, as occupancy dropped below 19%, coupled with a 5.2% YOY drop in rate. TRevPAR remained positive in the month, at $57.92, but was down 68.2% YOY.

As revenue dropped, so too did expenses, but at a much less severe pace, illustrated by a smallish 8.0% drop in total overheads on a per-available-room basis.

After a February that recorded positive GOPPAR, March turned negative, with a dizzying 243.4% YOY drop to $-46.73.

Signs of a Hotel Rally Emerge as COVID-19 Persists