As Peter Drucker once wrote, “what gets measured gets managed”. However, data by itself offers limited aid for the evaluation and decision-making processes that every business strategy needs. The depth of analysis performed on the available data is therefore the key to identifying the issues that a company faces, and the necessary steps to overcome them. The quality of the analysis of “what gets measured” will then define the success of the action plans designed to “get it managed”. In this post and the next we will describe the two most widely known methods to analyze financial data - horizontal and vertical analysis – and provide examples to clarify their uses and calculations.

Once we have checked that the two conditions (comparability of time periods and measures) are met, calculations are very straightforward. For the sake of simplicity, we will call our measure X, and denote the time periods by numbers: 2 for the current and 1 for the previous (or base) one. Therefore, X2 will be our measure in the current period, and X1 will be the base measure.

The first step, is to compute the difference between the current measure and the base: X2-X1. This will show us how much X changed from one period to the other. Note that you should always subtract the base from the current measure and not the other way around. What we want to do next is to understand how that change compares to the measure in period 1. In mathematical terms, we need to divide the difference we just computed by the base measure: (X2 - X1)/X1. Finally, because our goal is to identify the percentage change in X, we must multiply by 100. Therefore, the complete formula is:

Let’s use an example:

You are the CFO of the Illustration Hotel. Your accounting team has prepared the P&L statement for the year 2018, and you want to assess how the current performance compares to that of 2017.

Therefore, the Illustration Hotel achieved a 0.1% increase in Rooms Revenue in 2018 compared to 2017.

Table 1 summarizes the percentage changes for all the items in the summary operating report, calculated with the same formula: 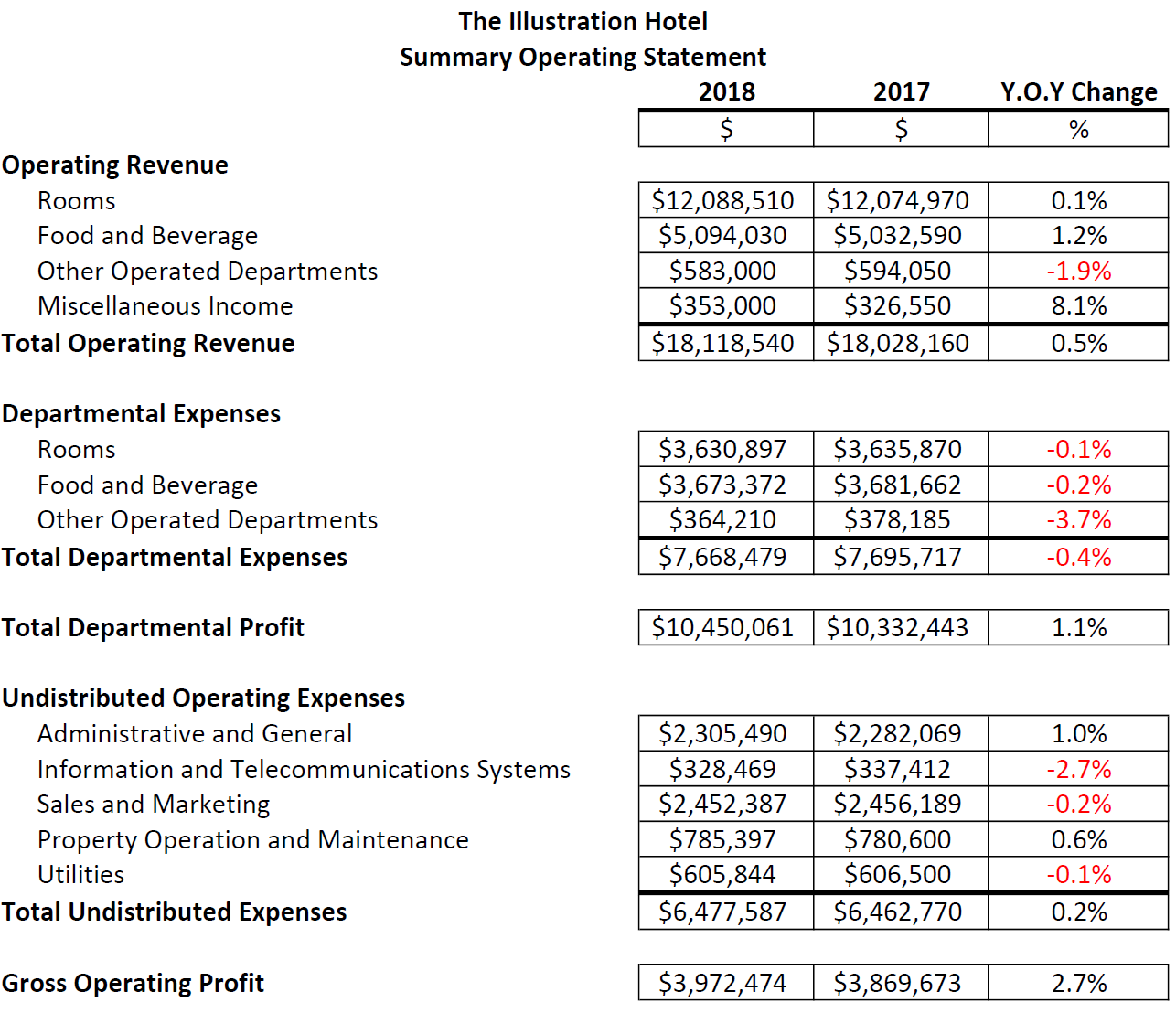 From the horizontal analysis, you can be quite optimistic about the 2018 performance. The operation seems to have become more efficient, with all revenues increasing, except for Other Operated Departments, and all departmental expenses on the fall. Undistributed expenses show more mixed results, albeit the total has remained nearly stable. Of course, you will want to take a more detailed look at the revenues of Other Operated Departments, and A&G and P&M expenses, to understand why they show results that differ from the trend. But all in all, GOP shows a healthy 2.7 percent increase.

However, horizontal analysis allows you to not only identify the trends in your own property, but also compare them to your competitors’ to better assess your operation’s standing in the market. So, after calculating the Y.O.Y % changes for the Illustration Hotel, you decide to compare the results with the averages of your competitive set. Table 2 shows the Y.O.Y. % changes side by side: 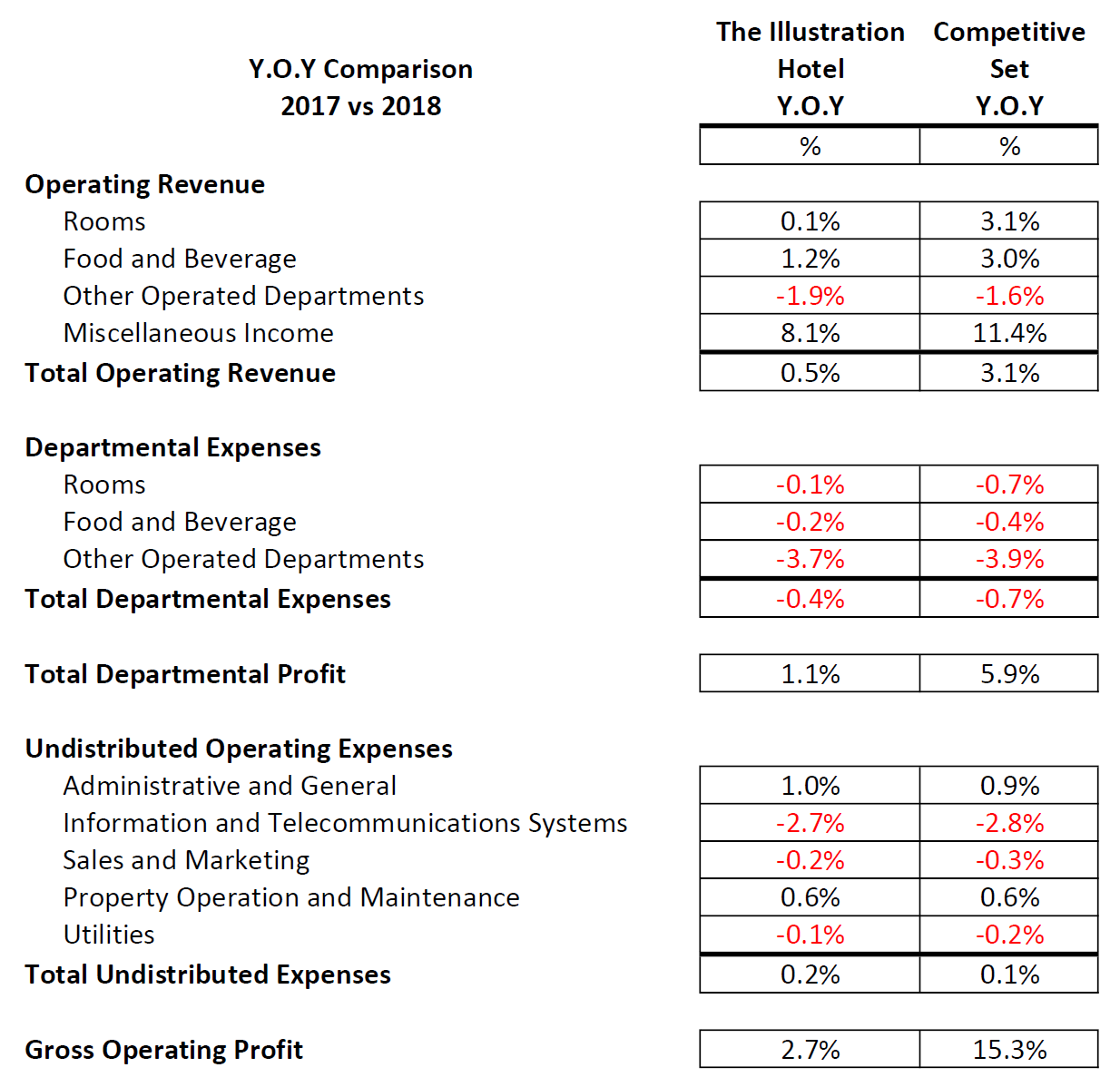 This comparison might affect conclusions a little bit. Even though the Illustration Hotel’s Operating Revenue shows an upward trend, it is not nearly as positive as its competitors’ average. Expenses seem to be more aligned with the set’s trend, but with revenues lagging far behind the average, this isn’t very good news either. In the end, compared to your competitors’ 15.3 percent increase, your humble 2.7 percent gain in GOP leaves a bitter aftertaste.

A detailed analysis of each schedule can explain these results further. It could be that your property is capturing just a little part of a generally growing market, and you might wonder why you are not capitalizing on a larger share. Maybe your property is already the market leader both in terms of revenue and efficiency, so your ability to further grow revenues and decrease expenses would be limited. Perhaps your competitive set does not really match your operation and you need to reassess it.

As you can see, horizontal analysis is a tool that helps you understand the data so that you can ask yourself relevant strategic questions about your operation. It does not provide any solutions, but rather acts as a guide for thought and decision-making.

Our final comment about performing a horizontal analysis deals with the difference between a percentage change and a percentage point change. This key distinction is oftentimes ignored, which leads to confusion when trying to interpret metrics that are expressed in percentage units across time. Occupancy is one of these metrics, so let’s use it as an example to clarify the issue.

A percentage point change indicates the arithmetic difference between two percentages, and it is calculated simply by subtracting the base percentage from the current one. In our example:

A percent change, as we have seen, compares the difference over time in the metric to its original value. So, the occupancy percentage change should be calculated as follows: