In Europe, Driving F&B Margins a Game of Inches

There was a time when food and beverage within the hotel space was viewed as a necessary evil. Hotel guests were lucky if they awoke to a continental breakfast and often had to be satisfied by a hallway vending machine.

No more. Traveler expectations today are different from those of yesteryear—they demand a higher level of amenities and service from select-service and full-service hotels alike. This has forced hoteliers to step up their F&B game, and operational fine-tuning has breathed new life into an area that was once an afterthought.

But does it make money? The short answer is yes, but squeezing out profits is an effort that takes continuous vigilance and improvement to firm up the bottom line, especially given the current cycle of escalating costs on both the labor and products sides.

In the hotel industry, the rooms department is responsible for the bulk of revenue—more than 60% of it. Unsurprisingly, pricing rooms is where hotel operators place the majority of their focus. It is what revenue managers are hired to do: sell the right room, to the right client, at the right moment, at the right price, on the right distribution channel. Never in that job description does it mention "sell the right plate of spaghetti bolognese."

That's because, once upon a time, F&B was an afterthought—a loss leader and a distant second consideration behind the rooms department. Dining rooms were often dreary and capacious, hidden in some corner of the hotel and sparsely outfitted. A quality dining experience they were not—more funereal than fun—and hoteliers and asset managers were happy if the F&B operation just broke even and was not a loss leader.

As traveler mentalities became less transactional and more experiential, putting heads in beds suddenly became almost as important as filling stomachs and pouring tipples. But no longer would a bland club sandwich or dry chicken cutlet cut it. Hoteliers were forced to step up their game and create F&B environments and experiences that spoke to these changing tastes—at breakfast, at dinner, with room service and to-go.

This ushered in the era of celebrity-chef driven restaurants that became focal points for hotels and concentrated on ingredient-driven cuisine, wowing not only hotel guests but the locals not staying on the property. More covers meant more F&B revenue.

Although taste trends vary worldwide, Europe, with its eclectic mix of countries and cities, is a decadent hodgepodge of cuisines. And although the dishes may differ from those where you are, there are some similar trends within the hospitality F&B business.

One is a move away from formality—something that is coursing through all segments of the industry. It falls somewhere between fast casual and full service. It's also a way to improve food margins, which is another way of saying: maximize revenues and stymie expenses.

There are steps hotel operators take to achieve this combination. One is centered on cutlery and china, and a move away from plastics to biodegradable packaging and utensils—like those you'd see at a fast-casual restaurant such as Sweetgreen—which are trashed or recycled after use, cutting down on dishwashing and table busing.

Moves like these not only impact purchasing but also labor (the main expense accelerator within the hospitality industry), where a limited scale of service is employed, similar to that of many fast-casual restaurants. Meanwhile, as flatware changes, hoteliers are placing added attention and focus on the quality of ingredients, as is the wont of travelers, many of whom are leaning more toward smaller-portioned plates and healthier food.

Another trend: More than a glacial shift, hotels are taking back control of their F&B operations, which in the long run translates into cost savings. A prior trend, now being reversed in some cases, consisted of hotels leasing out F&B space to be operated by a third party in exchange for an agreed-upon fee. By doing so, hotels were ostensibly waving the white flag and admitting an outsider could do a better job.

But as Tim Cordon, senior area vice president, Middle East and Africa at Radisson Hotel Group put it, that's changing. "The only reason to get someone else to run it is a situation where they can add extra value," he said, adding that hotel operators have become much more F&B savvy through hiring and strategy.

Tighter control, however, is an impetus for more creativity, which is vital in today's F&B climate, where there is myriad competition for stomachs. As Cordon put it, "You must become part of the zeitgeist. You have to be inventive."

Especially with breakfast, which accounts for as much as 70% of all F&B revenue at a hotel. While the often-gluttonous buffet remains a staple at some hotels, moves have been made toward a more artisanal approach that relies less on volume and more on high-quality ingredients.

Same as the rooms department, labor is the largest cost in F&B. And although some have proposed the idea of robots replacing waitstaff, the whole of the hotel industry has not yet embraced The Jetsons mentality.

Jacques-Olivier Chauvin is president and CEO of Fauchon Hospitality, a 130-year-old company, which operates F&B outlets in France and opened its first luxury hotel, Fauchon L'Hotel Paris, this past September. He understands too well the challenges of running profitable F&B operations.

He explained that after labor, it's cost of sales that brings down margin in Paris, because "French cuisine is expensive to produce because of [the] products," he said.

To help combat that expense, Chauvin said improvements can be made by tapping into locally sourced products versus imports, utilizing seasonal products, casual dining versus formal dining and better operational policies to reduce food waste.

At the Fauchon L'Hotel Paris, guests are even given access to complimentary goodies through an in-room gourmet bar, which Chauvin said isn't just a magnanimous gesture. "It is quicker and more cost-effective to rejuvenate the F&B spaces than to redo the rooms," he said.

Other F&B tips and tricks from Chauvin include no reservations ("The best option to maximize table rotation"), guests standing rather than sitting ("It increases guest concentration and makes for a better atmosphere") and upselling through small portions ("Small-bites menus allow for better food ratio").

What the Data Say

We looked at a slice of F&B data in Europe to investigate just how well hoteliers are driving F&B success, and the data were unsurprisingly disparate depending on location.

Barcelona has been a star. In 2018, F&B profit was up 4.3% YOY and has risen a robust 115.3% since 2012. However, its continued crackdown on tourism could pull these numbers down. And although profit growth is strong, expenses on the F&B side are keeping pace.

Paris, conversely, is a straggler. Its slight profit margin is coupled by anemic YOY profit growth, which actually turned negative in 2018 and is down 15.4% since 2012. Rather stunningly, F&B expenses since base year 2012 to 2018 have risen 20.5%. 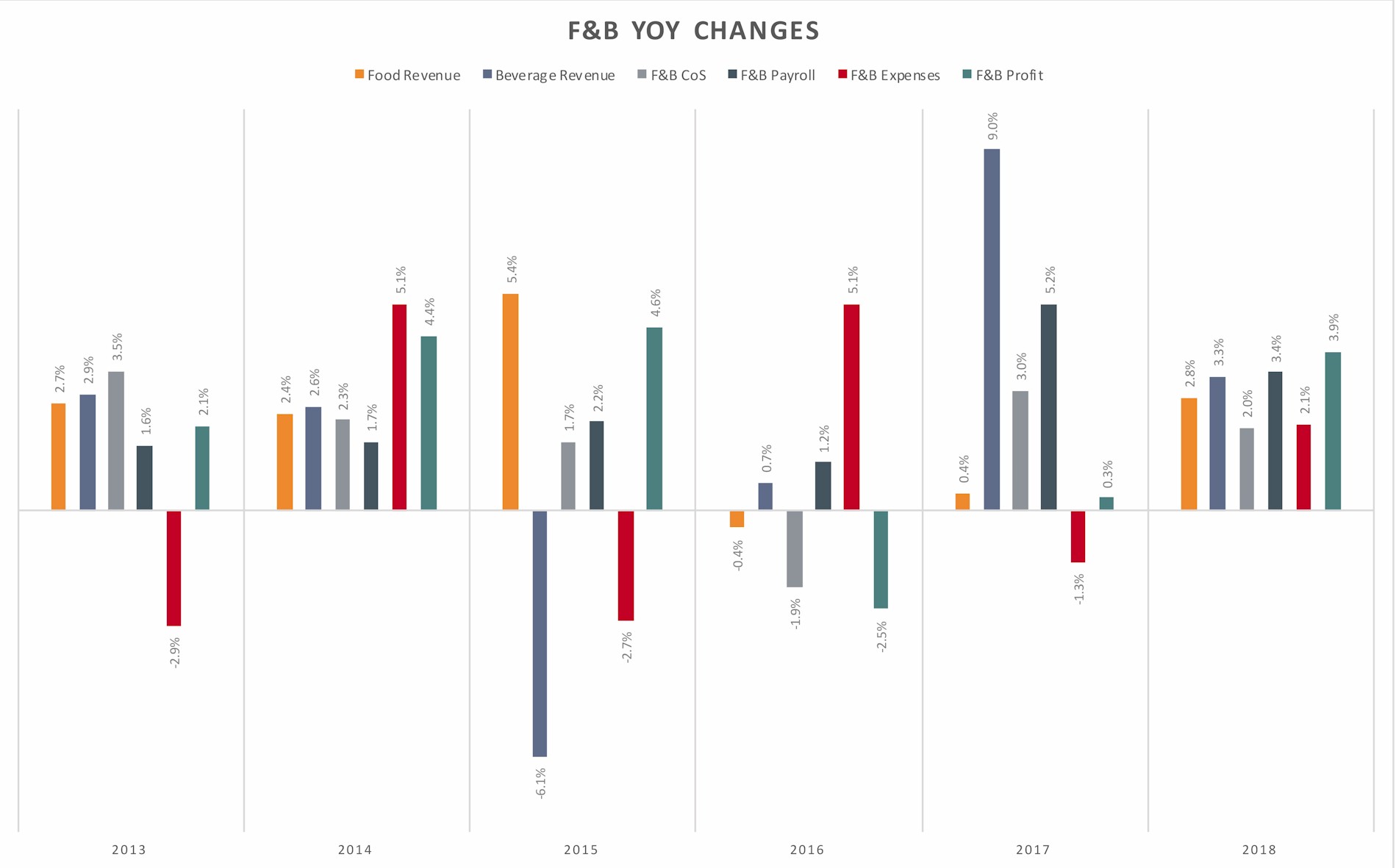 In the long run, the aim of all F&B operators is to find ways to lower operating costs, particularly food cost. A profitable restaurant typically generates a 28 percent to 35 percent food cost, the ratio of cost of food sales to food sales. When you couple food costs with labor costs, it can be upward of 75 percent of total sales. Keeping a food cost around 30 percent is optimal. That means continual scrutiny of not only your own bottom line, but those of your competitor establishments to gauge whether you are winning or losing. If the latter, what can you do to improve your margins and where should the focus be? If the former, see where you are outperforming the competition and find ways to improve where you are even or at a small loss. Remember: "Continual improvement" to improve products, services or processes only works when you can measure your effectiveness and efficiency.

Making food and beverage the focal point of a hotel can be an additional revenue driver if managed well. The key is to not only understand your costs, but also be constantly vigilant of them to drive margins.

Food should be a thought; not an afterthought.

This article was originally published on www.hotelexecutive.com.