The Story of Benchmarking: History, Processes and Practice

In business today, benchmarking is a common term most are familiar with; but, have you ever thought of the origin of benchmarking. Who developed this concept and when did it become part of standard business practices?

Let’s start by defining benchmarking. According to the Merriam-Webster Dictionary, benchmarking is defined as the study of something, such as a competitor’s product or business practices, in order to improve the performance of one’s company2 and the Cambridge English Dictionary defines benchmarking in even simpler terms as the use of something as a standard in order to improve your work, products, or processes1. When you hear the definition, the idea doesn’t seem revolutionary and you can surmise that companies have been doing this in some form for centuries, but the organized and systematic process of benchmarking did not come into wide acceptance until the late 1980s.

“The formal definition of benchmarking is the continuous process of measuring our products, services and practices against those of our toughest competitors or companies renowned as leaders.”
Robert C. Camp, “A Bible for Benchmarking, By Xerox”

Benchmarking evolved over time into the practices we see in play today. Gregory H. Watson, former vice president of quality at Xerox Corporation and regarded as an authority on benchmarking, describes the evolution of benchmarking in five major phases: reverse engineering, competitive benchmarking, process benchmarking, strategic benchmarking and global benchmarking3. The era of reverse engineering occurred in the 1950s to the mid-1970s when companies were doing exactly as the name implies; tearing things apart, examining them and then improving upon them before putting them back together.

In the mid-1970s, Zerox embarked on creating the next phase of benchmarking, competitive benchmarking. For many years Zerox was the king of copy machine manufacturing, but they found themselves in a precarious position when their Japanese competitors were able to manufacture higher quality copy machines for far less than Zerox. Zerox saw their market share plummeting and decided to do something about it. The company went on a quest to determine how their competitors where able to accomplish these quality and operational efficiencies, thus creating competitive benchmarking. By the time Zerox was awarded the Malcolm Baldridge National Quality Award in 1989 they had benchmarked nearly 230 performance areas across multiple industries.3

In the early 1980s, the focus of benchmarking switched from competitive benchmarking to process benchmarking. Where competitive benchmarking focused on the direct competition, as the name indicates, process benchmarking took it a step further and encouraged companies to look beyond their own industry segment and investigate best practices in other industries. A prime example, Zerox examined warehousing processes at L. L. Bean; which, at that time, was regarded as having the best warehousing procedures in the retail industry. Zerox was able to incorporate these best practices and create efficiencies in their warehousing operations.4
The focus on process benchmarking continued, but in the late 1980s two new phases emerged: strategic and global benchmarking. In strategic benchmarking a company not only focuses on processes but examines the entire way they are doing business. Sometimes it is the overall corporate structure and organization that is restricting a company from reaching optimal levels. The final phase of benchmarking described by G. H. Watson was global benchmarking, which involves examining standards on a global scale including international trade, cultural and business processes.3

Even though there are multiple types of benchmarking, the same process and steps apply to them all. Several companies stand out when researching the formal steps in the benchmarking process including Xerox, Motorola and AT&T to name a few. As Xerox is recognized for coining and truly defining the term of benchmarking, the following are the 10 steps in the benchmarking process developed by Robert C. Camp, Manager of Benchmarking Competency Quality and Customer Satisfaction at Xerox during the company’s transformation in the 1980s. The process was outlined in Camp’s article titled “A Bible for Benchmarking”, published in the June/July 1993 issue of the Financial Executive. He organized the process into four phases: planning, analysis, integration and action.4 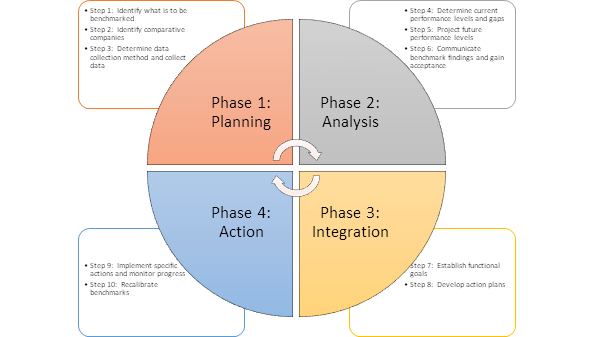 Even though every benchmarking step is important, identifying what is to be benchmarked in the first step is arguably the most crucial to the success of the entire process. When identifying what to benchmark, companies should examine everything including products and processes. When first embarking on a benchmarking quest, the areas chosen should be integral to the business and have the potential to make a compelling impact. Once these have been addressed, the company can continue with other initiatives to strive for overall operational efficiencies and increased profitability.

In the fast-paced world of hotel finance, costs can quickly fluctuate depending on trends in the industry and brands, owners and operators must continue to innovate and create value in their hotel assets. One way operators can gain insight is with monthly profit and loss benchmarking data provided by HotStats. This information allows HotStats customers to benchmark themselves or understand monthly market trends for all revenues, expenses, payroll and profitability for all operating and undistributed departments all the way down to GOP.

Fill out the form below to download the full report »